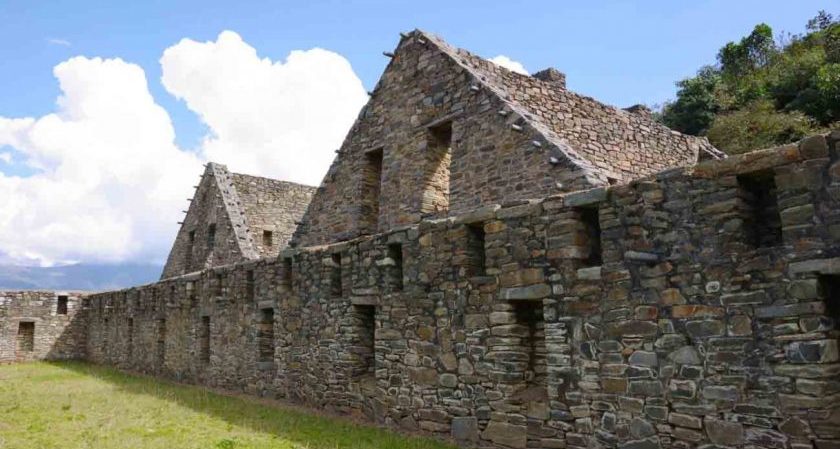 Choquequirao, The Cradle of Gold.

Nicknamed as the twin sister of Machu Picchu, this spectacular Inca Site thought to be initially the last Inca Capital, The Lost Inca City. Due to its location and difficult access, Choquequirao is visited by few travelers.

It is Peru’s main priority to build a cable car to attract more visitors every year since it is a perfect alternative site to Machu Picchu. Visit this magic place soon, before it gets crowded.

Another important archeological located in southern Peru, similar to Machu Picchu in structure, architecture, and history. Choquequirao means Cradle of Gold and is located on top of a mountain at 3,050m (10,010 ft) above sea level, in the Vilcabamba Mountains of Santa Teresa Region, La Convencion Province, Cusco Region.

Choquequirao is an ancient Inca settlement occupied during the 15th and 16th centuries. During the high Inca Empire was an important citadel that dominated the Apurimac Canyon region, Pachacuteq the 9th, Inca King was the builder of Choquequirao and his son Tupac Inca Yupanqui remodeled and expanded until it became the largest empire in SouthAmerica know as Tawantinsuyo.

During the Hispanic Invasion, it is believed that Choquequirao has been used as the last bastions of the Inca resistance and refuge for the Sons of the Sun (“Incas”).

The Peruvian Tourism Authority stated: “Choquequirao may be one of the entrance checkpoints of Vilcabamba and an administrative center serving political, social and economic functions. Its urban design follows the symbolism of the imperial capital Model and has a ceremonial place dedicated to Inti (Inca sun god)”

Hiram Bingham visited the Choquequirao in 1909, two years before discovering Machu Picchu; unfortunately, they performed excavation but found very little and became disinterested in the site. He was searching for the Last Capital of teh Incas, and as soon as he arrived at the place, he knew that Choquequirao was not the city he was looking for.

The Excavation began in the 1970s. Only then was it know the real size of Choquequirao; nowadays, only 40% of Choquequirao is restored, and the vegetation still buries the main part. This incredible site is almost twice the size of Machu Picchu.

In 2017 this imposing complex of stone was declared Best in Travel by the Lonely Planet travel guide.

What can we find in Choquequirao?

Choqueuirao is very similar to Machu Picchu; this is why it was called the twin sister of Machu Picchu and is expected to become one of the hottest tourist destinations in the next 10 years.

Besides the amazing views of flora, mountains, and fauna, you will be able to see.

The main plaza, Colcas or storehouses, and many ceremonial structures associated with water.

To visit Choquequirao, you must travel from Cusco city by car for about 4 hours until the trailhead in Capuliyoc. The easiest way to visit Choquequirao is starting in Capuliyoc and coming back to Capuliyoq the same way. However, there is a longer trail that connects with Machu Picchu and even with teh Last Inca Capital of Vilcabamba.

You can customize your itinerary with us, contact us about your preferences, and we will design a perfect trip for you. See below the most remarkable hike to this great destination.

Inquire about this Tour

Get more ultimatetrekkingperu inspirations, tips, and exclusive offers in your inbox

Sacred Valley Peru Best Things to Do and See

Choquequirao Citadel, The Cradle of Gold.

Hello! My name is Tom, ask me a question!